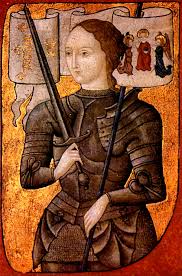 In commemoration of the International Women’s day, we’ll talk about an outstanding woman who fought endlessly during the Hundred Years War: Joan of Arc. Nicknamed as “The Maid of Orléans,” this lady was born in 1412 in Domrémy, France. Her parents were poor farmers named, Jacques d’ Arc and his spouse, Isabelle. A national heroine in her country, at the young age of 18, she led the army to victory.

By the time Joan of Arc came to the world, the situation in France was very complicated. The country was involved in a long war with England. As we mentioned before, this war was known as The Hundred Years War, and the dispute focused on who would be the heir to the throne of France. At an early age, Joan of Arc will develop an interest in the situation in her country that will lead her to fight for the causes she believes fair.

Although we know her as Joan of Arc, she called herself Jehanne la Pucelle or Joan the Maid. “Pucelle” means maid and as well implies she was a virgin woman; a fact that was very important for the society since they treasured more the female virginity than marriage. Her military career didn’t last long, just one year from 1429 to 1430 when she was sadly captured by troops that were loyal to John of Luxembourg. Therefore, she was delivered to forces loyal to English, King Henry VI. She was condemned and burned at stake in 1931.

When Joan was captured by the English troops, she was locked in a castle until the day of trial. One day, she became so frantic that she decided to jump off the castle. Maybe she was trying to do a suicide attempt, or she just wanted to scape. Unfortunately, they recaptured her, and she had to face her inevitable fate.

Joan didn’t engage in combat; on the contrary, her role was more strategic. She was the military that rallied the troops and helps them with the premeditated plan to pursue next. Joan’s weapon was her banner, and she carried throughout the battle instead of any weapon. In fact, you may find a famous quote of her saying: “I love my banner forty times better than my sword. And when I went against my enemy, I carried my banner myself, lest I kill any. I have never killed a man.”

Even after her death, controversies concerning her life remain dormant to the present days, questioning if she was really a woman or even if she was killed or remain alive until the age of 57. There are countless of theories of her life and nothing is entirely sure about her journey, the truth is, she has endured in the hearts of the French people, and they celebrated as a hero. And of course, worldwide, she is an icon of the history that helped to shape an entire nation.