Isabella I of Castile 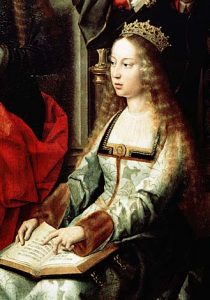 Isabel I de Castilla was born in Madrigal de las Altas Torres, Avila on April 22, 1451. She would grow up to be queen of Castile and Aragon. Alongside her husband, Ferdinand II of Aragon, their reign was a pivotal turning point for the Iberian Peninsula. It was their marriage that solidified the two kingdoms of Castile and Aragon. They shared power equally and established a code of law which strengthened the monarchy and enable the toppling of the power that the nobles held within their kingdom.

A pious Catholic all her life, she made it her mission to regain the final Muslim-ruled territories and fully conquer Spain. She was held responsible for creating the Inquisition. She had citizens, even the Jews and the Muslims, convert into Catholics or be expelled from the country. While this was marked by history as a misplaced religious zeal which destroyed what was a remarkable religious tolerance and co-existence, at the time she was lauded for her dedication to the Catholic faith–particularly by the pope.

For her time, Isabella was quite forward thinking when it came to her marriage and the role she would play. She entered into the marriage with Ferdinand with a prenuptial  agreement that stated she would be on equal terms. She would be a ruling monarch in her own right. In historical texts, it was marked how she would ride into battle in full armor and how the majority of their army looked to her for morale and leadership. It was believed that her rule had the blessing of God.

Her rule forced the mass exit of Jews and Muslims and their immigration to lads throughout Europe and North Africa; others “converted” yet practiced their real faith in secret were hunted down and purified by the Inquisition.

Isabella, once establishing peace, sought forth to progress the empire and funded Christopher Columbus and his explorations. These exploits of his led in Spain’s overseas empires and Spanish domination of Europe for the next century. This also led to the mass Christianization of the people of Latin America and the use of Spanish as the base language of millions.

Her achievements were many and great. Spain was wholly united. The power in the country was held by and centralized by the crown and no longer under the yolk of nobles. She rehabilitated the finances of the Spanish crown which was left in heavy debt under the reign of her brother Henry IV. With this as a foundation, Isabella and her husband created a legal framework for their country and The Catholic Church was successfully reformed. Through her children, she made splendid political alliances which allowed her to outflank France.

Despite this, there were several points in their rule that left quite the bad impression. The Inquisition and its intolerant treatment of religious minorities was famous for its cruelty. When the Muslims left, they took with them their advance knowledge in medicine. As a result, when plagues and illnesses wreaked havoc on local towns, populations were decimated.

Isabella officially withdrew from governmental affairs on the 14th of September 1504 and several weeks later, passed away. Several decades later, there were talks about her being canonized as a saint but that was left with much opposition from Jew organizations. While this is still being debated on in Rome, there really is no doubt that she was a woman her made her mark in history.